Traditional Clothing in the Philippines 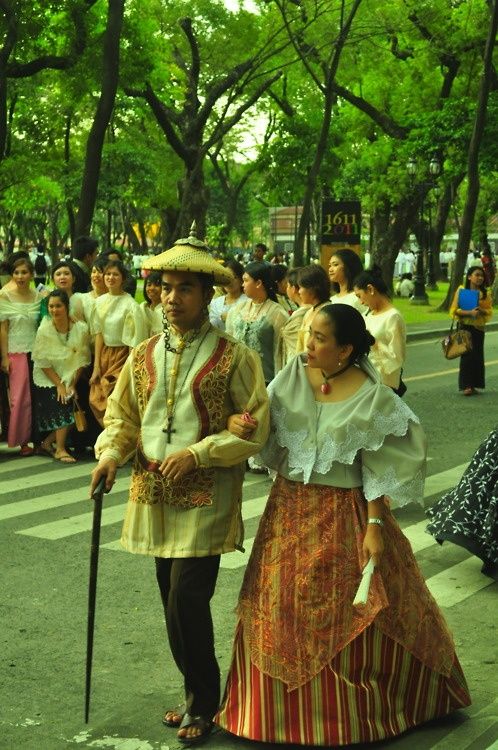 Traditional clothing in the Philippines is rather colorful, ornate, and beautiful. Filipinos lived under the occupation of other countries for centuries. That’s why their national attire was formed under the influence of different cultures and got some of their features. The US, Spain, and Japan had the biggest impact on the traditional clothing of the Philippines. But nevertheless, Filipino folk dress is very unique, authentic, and even tribal, if we can say so.

The main factors that formed the traditional clothing of this country are climate, cultural traditions, foreign conquerors, and way of living.

Men’s National Costume. Barong tagalog (a formal garment, often made from thin fabric and richly embroidered) is used both by men and women. It looks like a tunic or shirt with long sleeves and is worn over a usual shirt. Filipino men often wear barong tagalog with a Chinese collarless shirt (called “camisa de Chino”). Barong tagalog can turn European-style clothing into Filipino easily. It is ornamented or embroidered with traditional patterns. And it can be made from various fabrics, but mostly natural: like pina fabric (hand-woven from pineapple leaf fibers), jusi fabric (machine-woven from banana silk), and banana fabric (hand-woven from banana fiber). 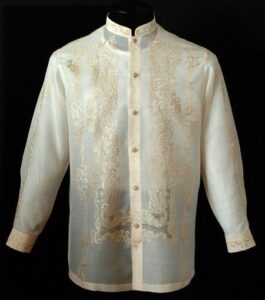 Filipino men wear different kinds of trousers or even wrap-around skirts with a barong tagalong. Often they use Western-style pants, and still, their attire looks rather traditional and has a local flavor.

Muslim men in the Philippines use a wrap-around skirt and a loose tunic or shirt. Their clothing is formed not only by their religion. It has some national features also.

Women’s National Costume. Barong tagalog is as well used by women. But there are many much more feminine and beautiful female clothing. For example, mestiza dress. It is a formal dress made from lace and embroidered richly. It has butterfly sleeves. And it looks really charming. Actually, the mestiza dress is a version of baro at saya, but more sophisticated. Baro at saya means blouse and skirt and has a lot of variations. It is very typical for people in the Philippines to wear baro at saya. In the past, it used to be just a short blouse with long sleeves and a long wrap-around skirt. But today this national costume can be very ornate and beautiful.

In support of the above let’s talk about another variant of baro at saya, a very popular among Filipino one. It is called “Maria Clara dress”. This is a dress of Filipino national novels heroine Dr. Jose Rizal. It consists of a collarless blouse, waist-long and with bell sleeves; a bubble-shaped long skirt; a stiff, neck-covering pañuelo (a scarf); and a hip-hugging, knee-long overskirt.

Another popular garment in the Philippines is a dress called “terno”. It evolved from baro at saya but turned into a dress. Terno has butterfly sleeves, it is always long. There are plenty of designs and styles of a terno. This dress is mostly used for special occasions.

Muslim women in the Philippines wear long skirts, long-sleeved shirts and scarves to cover their heads. Women can also use long trousers instead of a skirt. Some of them add an umbrella to their set.

There is also a very interesting piece of clothes called “malong”. It is a hand-woven piece of cloth and a very multifunctional one. It can be used as a skirt for men and women, a blanket, a dress, a bedsheet, a prayer mat, a hammock etc. Mostly malong is used to show the social and economic status of the wearer. For example, the royal colors on malong show that the wearer has a royal status. 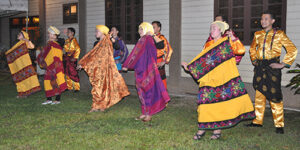 In the Philippines, there are also many tribal costumes that are traditional for a certain tribe. They all are handmade and decline the features of the tribe, its traditions, beliefs, symbolics, folklore, and so on. Here are several tribes that have their national tribal clothing: Mandaya, Bagobo, Maranaw, Yakan, Kalinga, Ifugao, Samal, Aetas, and others. 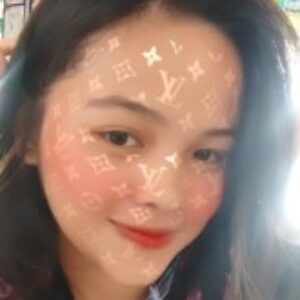 Passionate writer and blogger in the fashion space with dreams of becoming a top influencer in the future.
All Posts