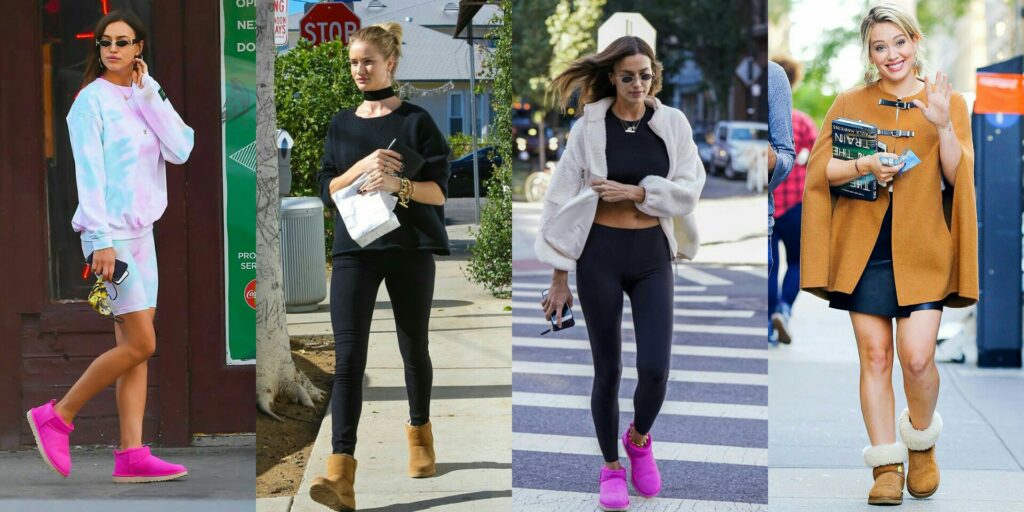 Ugg boots are one of the best boots one could style, especially during winter, because they are more than just a creature’s comfort! Stars like Selena Gomez, Rihanna, Gigi Hadid, Irina Shayk, and also Kendall Jenner have rocked them, and they truly looked super beautiful. Here, we will be going to look at different types of ugg boots that celebs wear when stepping out.

Let’s take a look below and see what stars are wearing with ugg boots and the type of boots!

The Russian model and television personality, Irina, has never gone wrong with fashion. She looked sporty in hot Ugg mini boots which she paired with tie-dyed two-piece bike shorts and a sweatshirt set and completed her style with classic sunglasses as she stepped out.

The American model, Hailey Bieber, nailed a chic style as she wore short brown zipper ugg boots with brown bike shorts. She then paired her style with a printed kitted cardigan as she stepped out.

The Brazilian model, Adriana, looked classic in an all-black outfit. Lima wore tall black side zipper ugg boots with a matching jacket and leggings as she posed

Elsa Hosk looked super casual as she donned short brown mini ugg boots with an oversize gray blazer. She then teamed her style with white trousers, and completed the style with a white mini purse with chic sunglasses.

Gigi Hadid cuts a stylish figure in gray mini-button ugg boots with black leggings. She paired her style with a navy blue frock coat with a blue printed t-shirt and completed her style with extremely dark sunglasses.

The American actress, Keke Palmer, dressed to impress as she stepped out of New York City just looking stylish in light brown low-rise platform ugg boots. She then paired her by doubling denim with a cropped jeans jacket and a high-rise thigh-high slit midi skirt.

Celebrity Chanel bags. The 15 most iconic Chanel bag looks of all time