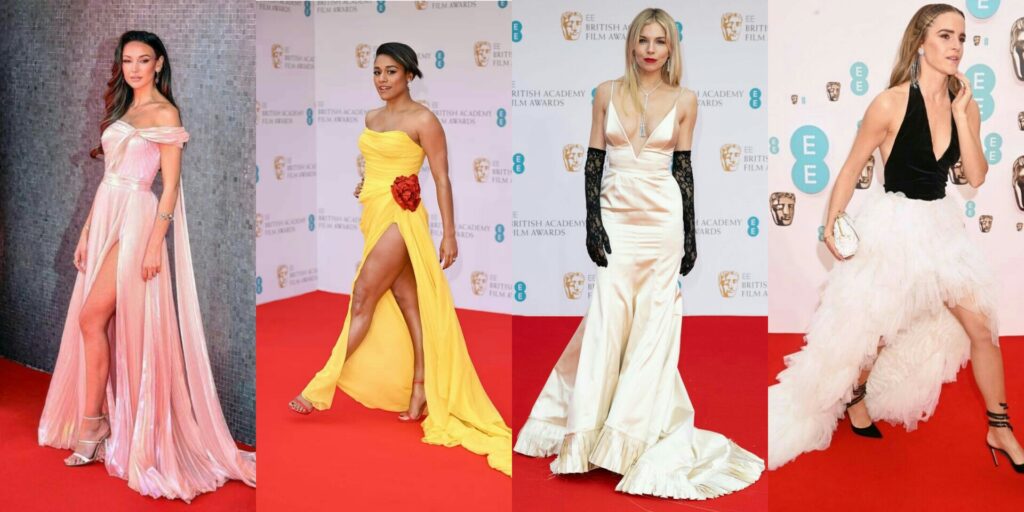 The 75th BAFTA or British Academy Film was officially kicked off on March 13th, 2022 at the Royal Albert Hall in London, England, honoring the best national and foreign cinema and Television. And it also gave an opportunity to its guests to show off their best looks on the red carpet.

We saw stars like Florence Pugh slaying in a black mini dress and with a baby pink train detail paired with black heels, and completed her style with chic gold jewelry, while Adwoa Aboah looked glamorous in a black strapless gown by Saint Lauren, Naomi Campbell wore a black velvet prom dress, and many more others.

Let’s have a look below and see the best celebrity dresses of fashion moments seen on the red carpet of the 2022 75th British Academy Film Awards.

The presenter, 37, ensured all eyes were on her as she dazzled in a neon yellow plunging neckline gown on the red carpet of the British Academy Film Awards held at London’s Royal Hall.

#2. Michelle Keegan attended the 2022 Virgin Media British Academy Television Awards held at the Royal Festival Hall on 8 May 2022 in London

The “Tina McIntyre” star looked glamorous in a pink off-shoulder thigh-high evening gown with silver strappy heels as she stepped on the red carpet.

The “House of Gucci” looked stunning in a green plunging neckline and completed her style with a black feather mini-handbag plus gold bracelets and statement jewelry as she stepped onto the red carpet.

Florence Pugh, 26, puts on a very leggy display in a black mini-dress with a baby-pink train detail. The English actress paired her style with black stilettos and completed the style with gold jewelry and statement earrings.

The “West Side Story” superstar catches the eyes in a yellow off-shoulder ruched chiffon evening gown with a train and thigh-high slit details. Ariana DeBose, 31, paired her style with red heels and completed the style with diamond rings as she stepped out on the red carpet.

The 56-year-old American actress and producer put on a busty display in a purple velvet dress with a plunging neckline and black lace trim as she graced the red carpet for the British Academy Film Awards.

The French actor looked typically stylish in a white off-shoulder floral print evening dress with matching gloves as she posed for the picture on the red carpet.

The supermodel dons a black velvet gown as she graces the red carpet.

The 40-year-old actress stole the show in a glamorous pink satin slip dress with a deep V-neckline and frilled hem details. Sienna Miller paired her style with sexy black lace gloves and completed the style with chic jewelry.

#12. Morfydd Clark attended the British Film Awards in May 2022

The 33-year-old actress looked pretty in a sequined neon yellow plunging neckline evening gown as she stepped on the red carpet.

The “Star Wars: The Force Awakens” star looked effortlessly chic in a black tulle gown with matching heels. The 30-year-old actress completed her style with a diamond necklace with chic earrings.

The British fashion model looked glamorous in a black strapless gown with diamond rings as she stepped on the BAFTA 2022 red carpet.

All the amazing celebrity casual outfits Throughout 2022