The History & Lore Of Emerald 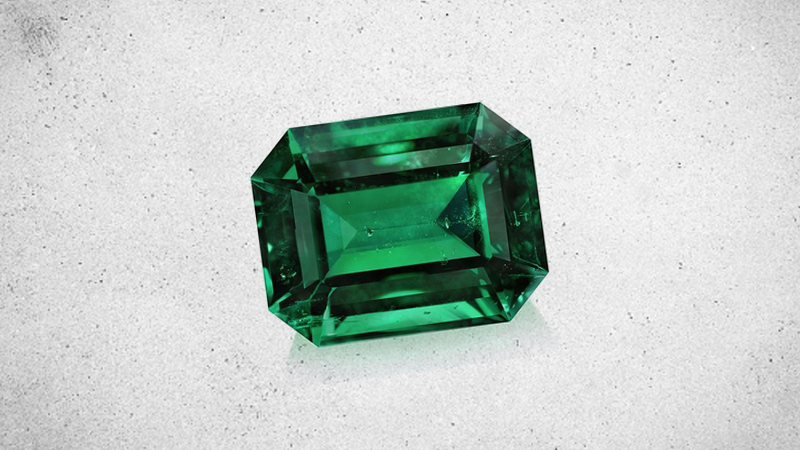 Emerald is so beautiful that it becomes arduous to articulate the unfathomable emotions you feel whenever you catch a glimpse of this gemstone. A brief look at this gemstone can last for hours. Emerald endows a unique allure that never fails to excite the curiosities of the beholders. The tempting green color of this gemstone is so full of passion and enthusiasm that the color grows over you before you can tell. There is not an ounce of a doubt why this bluish-green to green variety of the mineral beryl is one of the most sought-after color gemstones.

Although the fervid color and certain hardness of this gemstone are a cut above the rest, the immense popularity of emerald is primarily attributed to its stupendous history of legends and lore. Emerald has been associated with various cultures and religious symbolisms for thousands of years. The gemstone’s lush green color has been soothing the souls of many since ancient times. Old Christianity associated its satiating color and transparency with Jesus Christ and the twelve apostles.

The gemstone’s name has been derived from ‘smaragdus’, the ancient Greek word for green. Pliny the Elder, a Roman author, naturalist, and philosopher, described emerald as ‘nothing greens greener’ in his book Natural History, published in the first century AD. The Roman philosopher even wrote about the uses of emeralds with reference to early lapidaries: ‘have no better method of restoring their eyes than by looking at the emerald, its soft, green color comforting and removing their weariness and lassitude.

Emeralds were first mined as early as 330 BC in Egypt. However, if legends are to be believed, the oldest emeralds are 2.97 billion years old. The use of emerald gemstones by the Egyptians encompasses not only jewelry but also elaborating burials. They often used to bury monarchs with emeralds as a symbol of protection. Also known as ‘the Jewel of Kings’, the emerald has had a list of admirers since antiquity. The most eminent of them all was the Queen of the Ptolemaic Kingdom of Egypt, Cleopatra VII Philopator.

Because the ancients regarded emeralds as sacred symbols of fertility and immortality, Cleopatra had a rather conspicuous passion for emeralds. The queen used to adorn herself and the palace with emeralds and gift the gemstones to foreign dignitaries, displaying her wealth and power. She even claimed ownership of all the emerald mines in Egypt during her reign. Emeralds quite literally tickled the fancies of celebrated royalties, and Cleopatra was precisely the one who popularized that connection.

Emeralds were earlier also used as mystical talismans. The gemstones were believed to bestow eloquence, power, and material wealth to their wearers if worn as talismans. Emerald has also been known to sharpen the wit and strengthen the memory of its wearer. Many even thought that the gemstone could confer them the ability to predict the future. In the past eras, different cultures have had their own beliefs regarding emeralds. Arab and Spanish physicians used these gemstones to ward off poison and dysentery. The gemstone was even used to protect its wearer from evil and disease.

The widespread admiration that emeralds got ever since they were first mined has dramatically contributed to their popularity in modern times. Perhaps that’s the reason why the richest greens and the lushest landscapes are associated with the lush green color of emeralds; Thailand’s sacred religious icon is called the Temple of the Emerald Buddha, Seattle is known as the Emerald City, Ireland is commonly referred to as the Emerald Isle, etc.

Emerald even enjoys a fine level of supremacy when it comes to royal jewelry. The royal collections in England and France have many emeralds set in necklaces, tiaras, and other jewelry. Harry Winston, the renowned American luxury jeweler, made the Seven Emerald Tiara for the empress of Iran in 1968.

Emerald is also the birthstone for May, and the history and lore of this restful gemstone have no bounds. There are so many ancient tales associated with emeralds, and narrating them can take all the time in the world. From being considered talismans to confer riches and symbols of immortality to being associated with Jesus Christ, the emerald has a history that’s interesting enough to inflame thousands of feelings. Time has only strengthened the demand for emeralds in society. In today’s times, emeralds are one of the most coveted gemstones.

People enthusiastically seek out emeralds in a variety of fashions because of the gemstone’s terrific score of 8 on the Mohs scale of hardness. Such a good score only implies that you can fashion emeralds in any jewelry as per your liking. The per-carat price of an emerald stone dramatically increases with an increase in its size. There’s a lot more than meets the eye as regards the history of this gemstone, but the only thing it lacks is you. It’s about time you adorned yourself with this thing of beauty!

The History & Lore Of Emerald