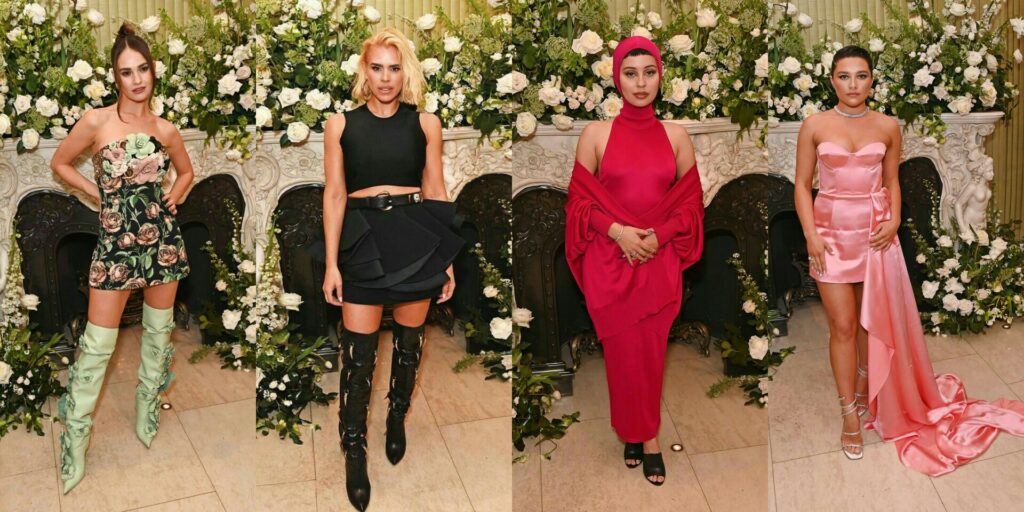 There were so many of the best fashion styles that were pulled off at British Vogue and Tiffany & Co. Celebrate Fashion and Film after party at Annabel’s on Sunday 13 March 2022 in London, England. Models like Jourdan Dunn showcased their modeling figures in eye-catching print outfits, while actresses such as Lily James pulled off a floral print mini dress that looked effortlessly chic. Here in this post, we are going to look at the best fashion styles from the British Vogue and Tiffany & Co after-party 2022. Let’s take a look below and see what models, singers, and actresses wore as they stepped out.

The 26-year-old English actress was one of the best stars who pulled off the most glamorous fashion style at British Vogue and Tiffany & Co. Celebrate Fashion and Film party in London, United Kingdom. The ‘Black Widow’ star, Florence Pugh, dazzled in a pink off-shoulder bustier satin mini dress with dramatic train detail, silver heels with silver stilettos, and finished off her fashion style with a diamond choker necklace.

The ‘Bridgerton actress was one of the best stars who rocked stylish outfits at British Vogue and Tiffany & Co. Fashion and Film Party in March this year in London, United Kingdom. Simone Ashley wore a purple draped mini dress with a matching oversize unbuttoned shirt, and completed her fashion style with black stilettos.

#3. Daisy Edgar-Jones stuns as she poses at the British Vogue and Tiffany & Co. Fashion and Film Party 2022 rocking an eye-catching dress

Here is another best fashion moment from British Vogue and Tiffany & Co. Baftas after-party that was pulled off by the 24-year-old British actress in London, United Kingdom on 13th March this year. Daisy Edgar-Jones wore a green tasseled gown with shimmering and plunging neckline details as she made her way out.

Alexa Demie was one of the many celebs who had stunning looks at the British Vogue and Tiffany & Co. British Film Festival Awards after-party. The ‘Euphoria’ actress wore a hot pink knit cardi midi dress and attached it with a matching long-sleeve cardigan. Alexa topped off her fashion style with black heels, and a diamond-hinged bangle, and finished the style with diamond rings.

#5. Jourdan Dunn looked stunning at the Fashion and Film after-party 2022 in an eye-catching print outfit

The supermodel didn’t fail the fashion style as she stepped at Annabel’s on Sunday 13th March 2022 in London, England. Jourdan Dunn rocked a white leopard print halter neckline mini dress with a matching chiffon overcoat that she let fall over her shoulder and finished off her style with leopard print thigh-high boots.

#6. Billie Piper at the after-party, looking effortlessly beautiful in an all-black look

See all the celebs at the 2022 Emmy Awards after-parties