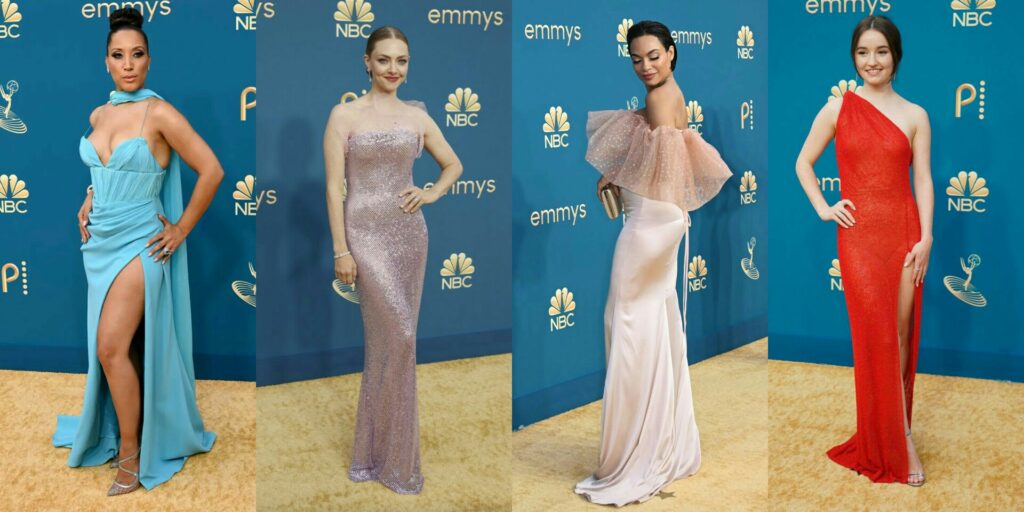 The 74th Emmy Awards were held on September 12th, 2022, at the Microsoft Theater in Los Angeles, California. And both the actor’s and actresses’ styles were on point. They gave us memorable fashion styles as always. Here are our best looks of the 2022 Emmy Awards Red Carpet.

Today, I will share with you all the best celebrity looks from the 74th Emmy Awards red carpet. Scroll through and see stars like Zendaya, Sydney Sweeney, Hoyeon Jung, Amanda Seyfried, Kaitlyn Dever, Lizzo and, in between, others on what they wore at the Emmy Awards!

“Last Man Standing” actress, kaitlyn Dever looked stunning in a sexy slit one-shoulder fitting and a flared sparkling red prom dress. She then teamed with silver heels as she stepped onto the red carpet.

The American actress cut a seriously stylish figure, wearing an eye-catching sequined blue split dress with black strappy heels. The “Morning Show” superstar completed the style with chic diamond choker jewelry as she posed for a set of pictures on the red carpet.

The “Watch Out for the Big Grrls” star looked comfy chic on the red carpet as she dazzled in a red tulle gown paired with brown strappy heels.

#8. Rosario Dawson showcases her slim physical in a pink gown at the Emmy Awards Red Carpet

The 43-year-old American actress brought elegance at the 74th annual Emmy Awards in a satin rose evening prom gown with a corseted top while she walked the red carpet.

The “Scandal” superstar Kerry Washington looked effortlessly chic in an off-white Elie Saab mini dress with train details. The 45-year-old actress paired her style with sheer black stockings with black pointed-toe heels and completed the style with a chic necklace.

The Marvelous Mrs. Maisel superstar Rachel Brosnahan slips her hourglass curves in a navy blue evening gown with an embellished accent. The 32-year-old American actress paired her style with gold heels and completed the style with statement jewelry.

Lily James wore a sequined gold-wrapped gown that featured a plunging neckline and crisscross back.

The “Great” star wore a black and pink dramatic gown as she stepped out on the red carpet.

The “Great” star wore a black and pink dramatic gown as she stepped out on the red carpet.

These Australian celebrities have the coolest street styles

All the best looks from SAG Awards 2022 red carpet