Talking about Nina Dobrev she is a very cute and beautiful actress. She belongs to Candia and is known as a Canadian actress. She shows her outclass acting skills in the TV series The Vampire Diaries. She played multiple roles in this series and all were as doppelgangers.

However, it seems funny to say this world but these series were about supernatural creatures so anything could be expected. I like her two most famous roles, Elena Gilbert and Katherine Pierce or Petrova.

Moreover, Elena Gilbert, her role was very good but as Katherine Piece she put the fire to the whole series. Along with her acting her dressing sense in this character influences everyone.

Furthermore, a girl with multiple personalities also invents innovative fashion and dress ideas like her character. Okay, now I`m going to enlighten you about the stunning dresses she wore in this series. They’re my favorite dresses of Nina as Katherine from each season;

Firstly, this dress was very beautiful and she wore it in season one. This is her coat of dress for this season. She wears all dresses like this and even in her debut as Katherine Pierce. Just have a look on at how beautifully it is designed.

In addition, it’s a sky blue-like colored gown with having white net over it. It also has net flair under it that makes it more beautiful. Thus, she has light brown lines on it. She was also wearing a vintage hat with flowers.

Moreover, the accessories she was wearing were; a beautiful blue stoned neckless, earrings, and gloves. I suggest to you girls that you can wear it at a festival having an 80`s theme.

Secondly, this season my favorite look of her is at the party at Tyler’s house. Clearly, she has an incredible Black Lace dress. This was designed by a company known as Adrianna Papell. It was a very beautiful dress.

Katherine wore also this costume in TVD. This is from the time when she was talking to Damon Salvator in a phone booth. I don`t exactly remember the season but anyhow our main concern is about her dress.

Hence, she wore tight pants in it which were black. Well, she has also worn a sleeveless purple shirt. There was also a silver-colored neckless with two or more layers. This neckless has a unique design. It has ring-like stones on it.

She also gives wavy curls to her hair. This look caught my eye`s attention too.

Katherine wore this in season 2`s 1st episode. This is Pierce`s other iconic look that inspired me a lot. She was pretending that she is Elena Gilbert. Tight pants along with a sleeveless shirt were so nice. There was also a beautiful jacket on it with open zip.

Also, she gives heavy curls to her hair. The color of everything; her pants, her shit, and even he jacket was black. There was also a belt of pants with a golden giant pin. The black high heels she wore were classy. Have you noticed that she wore most of the dresses in black color? I guess this is Kat`s dominancy.

Other looks of Nina Dobrev

Many other looks of her that are also beautiful. But only these 4 are my favorite and inspired me. I`m just going to share the pics of other looks. 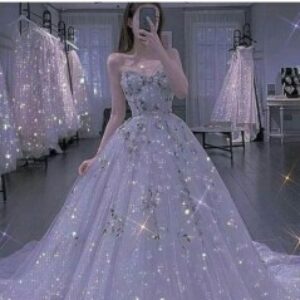