Made in Africa Beads (ILẸKE) 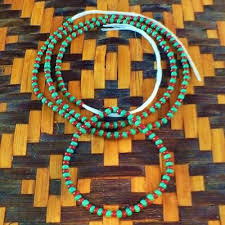 Nowadays, fashion style has been exposed to the whole world in other to learn from other people, whenever we are talking about fashion in Africa is indeed the most important fashion style, from hair African people make they seem beautiful more, what is available in the North may not available the south, however, ilẹke (beads) can never remove from Africa Attire because apart from the beauty it is essential for another something else in the life of African.

It is a language from West Africa, southwest Nigeria in Yoruba, Although there is a lot of meaning from other tribes they call it Ilẹke in Yoruba land, however, Yoruba beads play a lot significant role in any occasion of traditional events, which participants decorate their bodies with beads of different shapes, colors, sizes and devote to spiritual.

History of Ileke till date.

According to the Yoruba storyteller and their evidence, In the 11th century AD, some scientific research tells us that blue-green glass beads have been selling out from Yoruba people before they start a contract with European Union, during that period Yoruba people produced three different methods which they used powdered-glass to make beads from finely ground blue, green, and red glass, they polished beads into shape from broken glass, they drew beads from heated dark greenish and medium blue glass, these methods is made Europeans to traded it as one of the most sites in west Africa due to the method of producing it, unusual length and supplementary characteristic of it.

Who is wearing Beads (Ileke)?

Generally, in Africa beads is worn is show respect, rich, occasion, responsibility, belief, and main importance, which is fashion, there are five places where we can wear our beads too, and here is how they wear them to make them look amazing.

Women wear these to their heads to make them glamour and enhance their beauty, however, they can attach to their hair and tie to the head and some cultural men like Sango (Gods of thunder) this is how powerful they are and they tie to it their hairstyle, which is all back hairstyle or Suku hairstyle.

This is the main place beads is to be, but add beauty to our fashion, men and women are always wear their to neck and it amazing, this is common wear by Kings, Queens, Prince and Princess, chief, Rich rich, priests, new brides and groom, and some important people.

Wrist beads are a symbol of special people at same it is important in fashion, so some people always put them on their wrist to protect themself such as a priest, Prince and princess, and some chief.

Waist beads are z type of style that is beautiful, and amazing for African women to add more fashion to their outfits, the waist has been wear in throughout the world now because it is elegant, notwithstanding to women only, some men like to wear beads apart from spiritual.

This occurs to show their belief, and symbols and to earn respect, at the same time it can be put to the ankles for fashion, however, these are commonly used by traditional believers of Yoruba like Ileke Ifa (Gods of soothsayer), Ileke Osun (Gods of our mother water) Ileke Sango(Gods of Thunder).

Ileke has been categorized into two major types and these two are fashion beads and Traditional Religion beads. However, the beads so many beads in Yoruba land, but in other understanding let me explain like this, Here are the two categories of beads and their type;

This category is just meant for fashion and honor and it can be worn by anybody who can afford it and like it, this is popular wear by Kings and Queens, Prince and Princess, Chief and other people, beads are suitable for any occasion, there are many types of beads but you check this out on your outfit.

This is the most expensive and richest type of bead, this occurred because the research for Iyun is equivalent to Gold and it is deposited in the basement of the river before extraction after the Digging for Iyun is successfully extracted, it is shifted to polishing it to reveal its colors of wine and red, so Yoruba is always said that “Iyun is the father of beads” however, Iyun is still valuable and it is available throughout the world.

These types of beads are usually manufactured from glass, which is very lucrative and is available among Yoruba but it is common due to the method of production.

This is categorized under the traditionally religious people, it is used as their symptoms, Worship Item and some spiritual purpose, however, it makes them beautiful, and gives respect to them, they’re much cultural religion that they wear beads, these are the type of beads they such as Ileke Idẹ for Ifa worshipper, Ilẹkẹ Osun for Osun worshipper, Kẹlẹ sango, A round neck beads for worshipper and many more.

-It promotes the beautiful Yoruba culture and heritage.

-It is used on numerous occasions like marriages, funerals, etc.

-For kings and chiefs, it shows their social status among others.

-Some persons believed that necklaces can be somehow used as a birth control method, prevention of stillbirth, and also prevention of unwanted pregnancy.

-Protection against spiritual forces has also been described among the uses of the necklace.

Made in Africa Beads (ILẸKE)