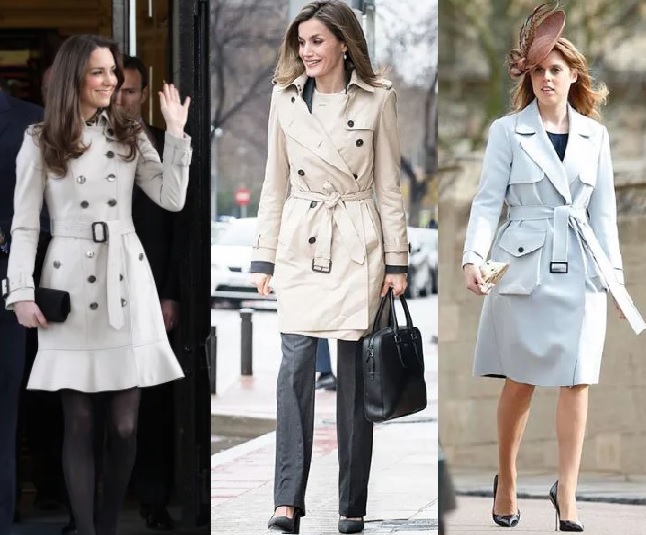 It’s still winter in the Northern Hemisphere, and thus, we are still in the trench coat fashion mode. This apparel never grows old. It has been the favorite go-to piece among the social set. It is also the go-to piece of members of the Royal Family during the autumn and winter seasons, leaving us with a desire to add this fashion classic to our closet too.

The elegance of trench coats has not been lost with time. It can be kept in the closet during spring and summer but can be pulled again come autumn and winter. Indeed, the classic trench coat never goes out of style. It’s both sophisticated and modern.

What made trench coat royals’ favorite apparel is the fact that it can be mixed and matched with any footwear or clothing underneath especially during public appearances. It can be worn with pants and long boots, or even dresses, and pumps.

During winter, royals usually wore their fashionable trench coats during public appearances to keep them warm. Catherine, the Princess of Wales, Queen Letizia of Spain, Princess Beatrice, Crown Princess Mary of Denmark, and Queen Maxima of the Netherlands, are some of the members of the royal family who love to don trench coats during autumn and winter seasons.

What is a Trench Coat?

The history of the trench coat stretched back to the late 1800s when the British army began to wear waterproof coats that could protect them from rain and cold weather in the trenches (excavation ground). Hence the name trench coat.

According to Michael Andrews’ brief history of trench coats, Initially, only British officers owned and wore trench coats during the war, which distinguished them from the rank and file — a distinction that denoted class differences as well, for military officers at the time came from the aristocracy. The trench coat quickly became a symbol of status and class.

War and the trenches are long gone but the trench coat is here to stay. Today, it is considered a timeless winter fashion. Royals, celebrities, and people from all walks of life love to wear trench coats.

However, as time goes by, the design of trench coats undergoes some twists, with cuts and styles being influenced by the modern concept of dressing in fashion.

But a classic trench coat draws its look from the original design worn by the British army: belted at the waist with raglan sleeves ending in cuff straps around the wrists that also buckle, to keep water from running down the forearm when using binoculars in the rain. The coat often has epaulets that are button-close, which were functional in a military context.

So when looking for the most sophisticated look on how to wear a trench coat in fashion, you can check how these royal ladies wear trench coats in style.

I'm a lifestyle blogger. I blog about fashion trends, skincare, health and wellness, travel and leisure, budget trips, and world royals. I have a special interest in photography, research, and European monarchy. I like to discover new learnings and experiences. I love nature and beaches.
All Posts