DIY Dresses by me

The Do It Yourself (DiY) ethic seeks to overthrow the idea that we will be provided for. We will provide for ourselves, through educating each other, through collective decision making. It fits into this larger concept of an ideal society.

“Don’t just sit there watching tv, go out and do something less boring instead.”

DiY and counterculture show us living examples of how a permanent culture could look and operate through offering us a rich and varied history of alternative ways of living and thinking.

Counter culture and DiY culture is similar though they have different roots. There has been many countercultural movements throughout history, yet it is since the 1960’s that many of these ideas really took hold as counterculture develops out of the 1960’s counter culture movements of the United States and DiY culture is a more UK-based movement centered around punk, rave culture, new age travelers movements and anti-roads protests, amongst other things.

DiY culture is more of a distinctly UK term, but can also apply to counter cultural groups anywhere. Its origins lie in the anti-establishment punk DiY movement and the free festival movement of the 1960’s and 1970’s. It developed through these movements and intensified during the 1990’s with the new age traveler movement, raves and the anti criminal justice demonstrations, the anti roads protests and the general anti-capitalist movement.

I am a passionate person and am fond of making DIY dresses. Here are two dresses which I have made all by myself.

This dress is also a DIY dress made by using a jeans which is cut into a piece of hot pant, black stockings, black top transformed into a crop top and a pink coloured full sleeve top cut into a decorative set of top.

This two dresses are my favorite one. Although there are other dresses too, this two are of my favourite. I would love to know your views about these two DIY dresses.

This is another DIY dress which is made by me. The skirt is DIY made with skin colour dupatta and the mask and the black crop top is also self made.

Apart from these I also have other DIY dresses which I use often in my daily life. There are several advantages of making DIY dresses. Reusing of old clothes, sustaining money are some of the advantages.

Show some love to these DIY clothes which will help me prosper more and help in the future creation of clothes and which will not only enhance the beauty of the figure but also mind and conscience. Do-it-yourself is not only an agenda for me but also a propaganda. 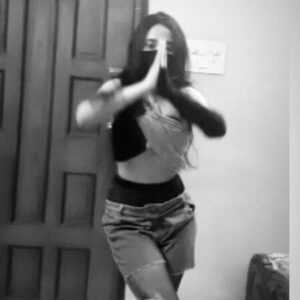 DIY Dresses by me