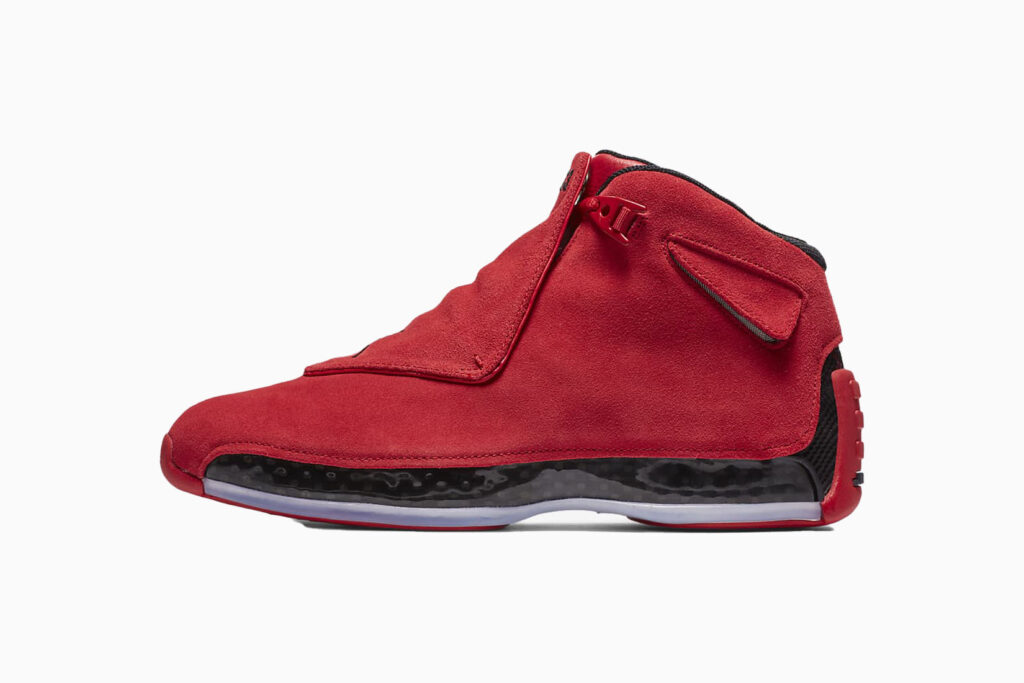 All Jordan shoes are associated with grit and perseverance thanks to the man behind the brand, but none more so than the XIIs.

These are the sneakers Michael Jordan wore during the famous 1997 Flu Game where he managed to score no less than 38 points while suffering from a bad case of flu. No wonder these are considered some of the best Jordan shoes ever made.

One of the standout features is the ribbed quilted panels on the upper, inspired by Japan’s Rising Sun flag, as well as the pebbled rather than patent leather. The XIIs are also available as low-top Jordans.

Taking inspiration from a WW2 Mustang fighter jet, the Air Jordan V is as fierce, determined, and uncompromising as MJ himself. The sneaker features smooth leather and nubuck, mesh side panels, and shark-tooth shapes on the midsole.

The fact that these sneakers were worn by Will Smith in The Fresh Prince of Bel-Air probably also contributed to making them fan favorites and some of the most popular Jordans around today.

Consider the elegant Air Jordan II one of the line’s most luxurious models. It was the first of all Michael Jordan shoes to use deluxe details such as faux-lizard skin, for example, and features brogue-like perforations and Italian craftsmanship, lending it some serious upscale panache.

With these nods to high-end fashion (and a higher price tag), this exclusive sneaker was one of the first to straddle the worlds of sportswear and the red carpet. The Air Jordan II can definitely be worn with a tux and is also available as a pair of low-top Jordans.

The Air Jordan 6 is all about speed and superlative performance. Every detail has been considered for game-optimization, from the two grip holes on the tongue for easy entry to the neoprene sleeve lining, boosting comfort and minimizing the risk of blisters.

Apparently, the sneaker was inspired by Michael Jordan’s Porsche 911 and the star won his first championship title with a pair of these ultra-cool creations on his feet, making it hands-down one of the best Jordan shoes of all time.

Perusing this list of the world’s best Jordans, you’ll quickly discover a common theme. Fast cars. Many of the best Js were inspired by top-of-the-range vehicles, including the Air Jordan XIV, which draws on the shape and style of MJ’s Ferrari 550M. Also, look out for the Jumpman logo which appears 14 times on this sneaker—a reference to this being the 14th in the Jordan series.

The most popular colorway of this model is the Last Shot, a black-red combo immortalized when MJ wore them for his winning shot in Game 6 of the 1998 NBA Finals.

If you’ve watched Netflix’ The Last Dance, then you’ll definitely recognise the Air Jordan XIIIs—the shoes Michael wore for most of the 1997-1998 season.

The sneaker looks indisputably and unashamedly luxurious—appropriate, really, given it was worn by Jordan at the apex of his fame. The inspiration comes from a panther—an allusion to Jordan’s dexterity and predator-like reflexes on the court, as well as his ‘Black Cat’ nickname.

Indeed, the outsole resembles a panther’s paw and there are holograms on the bottom and ankle that represent a cat’s glinting eye.

In the black and red Bred colorway, in particular, the XIII is one of the most popular Jordans ever. There are also low-top Jordans available in this model.

The most notable and intriguing feature of the XVI is the removable gaiter, lending these Michael Jordan shoes a vibe that is at once technical and trendy, fashion-forward and functional.

With Michael Jordan now President and part-owner of the Washington Wizards, the XVI was specifically conceived of as a sneaker that could be worn both on the court and in the boardroom.

One of the most characterful sneakers in the Michael Jordan shoe line, the VIII is chunky, defiant, and daring. With a chenille tongue graphic and twin straps that cross over the laces, the AJ VIIIs are most definitely a 90s-style sneaker and a winning choice for anyone seeking something a little different. Look out for the low-top version of the VIII, released in 2003.

One of the most traffic-stopping and attention-grabbing sneakers of all times, the XVII was worn by Jordan during his final farewell in Washington in 2003. It featured a driving shoe heel—another reference to the star’s penchant for ultra-fast cars—and came with a towel, brush, and driver’s manual.

Then there was the vamp cover—more like something you’d find on a deluxe Italian dress shoe. Definitely a pair of sneakers that no one will forget for a while.