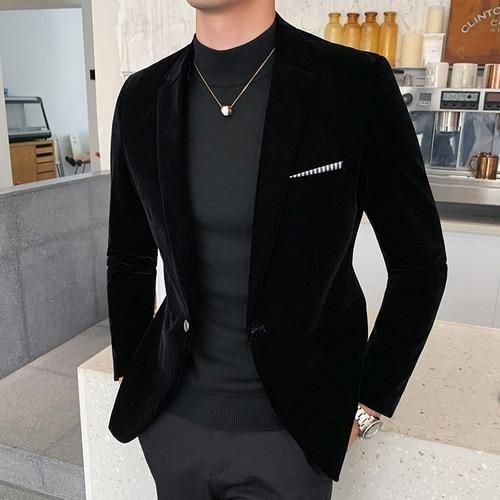 An assortment of a blazer should be part of every man’s wardrobe: they’re ideal if you want to look put-together but don’t want a suit.

When buying a blazer, you need to consider many factors. Do you know what to wear with one? What is the best material to use? A blazer shopping experience can be quite challenging if you don’t know what you’re looking for.

Can you tell me what a blazer is?

Blazers are separate jackets that are worn formally instead of forming part of a suit. Blazers were born at a different time according to some sources. Rowers at Cambridge are believed to have first worn them as glorified athletic windbreakers. Because of their fiery red hue, blazers were referred to as blazers.

Nevertheless, some believe this style of jacket was developed during Queen Victoria’s visit to the Royal Navy ship, HMS Blazer, in 1837. Blue double-breasted jackets were designed for his crew after the captain requested a new uniform. Nevertheless, men outside of rowing clubs and the Navy have worn this style for decades. Today, they are considered suitable for smart-casual events like weddings, work, and business meetings.

A blazer is different from a suit jacket, right? Blazers are typically considered less formal than suits in terms of formality. Blazers stand alone, while suit jackets come with matching trousers. However, the biggest difference between blazers and suit jackets is that blazers can only be worn alone.

How to wear a blazer

It’s not always easy to figure out how to style blazers because they are so versatile and can be dressed up or down. To help you understand exactly how to wear a blazer of any color, we’re going to break it down here.

A grey blazer can be worn in a variety of ways since it is arguably the most versatile. Wear yours over a thin shirt, a jumper, or a T-shirt with a pair of slim-fit trousers.

Whether you’re heading to a casual event or an office function, you can throw on a pair of stylish trainers. The perfect complement to your outfit, however, will be a pair of Chelsea boots or brogues in brown or black.

How to wear a blazer with jeans

It’s important to pick the right color for your blazer when you’re wearing it with jeans. The color navy is usually seen as one of the most failsafe options since the color is both high-quality and versatile, so it can be paired with almost any shade of denim. There are so many different hues of grey that it is also a great choice. The classic look of tweed with denim can also be achieved with denim.

What to wear with a navy blazer

As versatile as their gray counterparts, navy blazers look quite polished. They can also be paired with a round-neck T-shirt for a more casual look. For a pulled-together look, wear them over a casual shirt or jumper. If you’re going for a smarter look, pair a navy blazer with a pair of gray or tan trousers unless you’re doing something more casual – in which case, a medium-wash navy pair of jeans will be a perfect match.

What to wear with a tweed blazer

Shirts or smart jumpers look best layered over tweed blazers since they are always quite formal. With a pair of tan chinos or dark-wash jeans, you can wear your tweed blazer more casually.

An Overview of Men's Blazer Styles and How to Wear Them