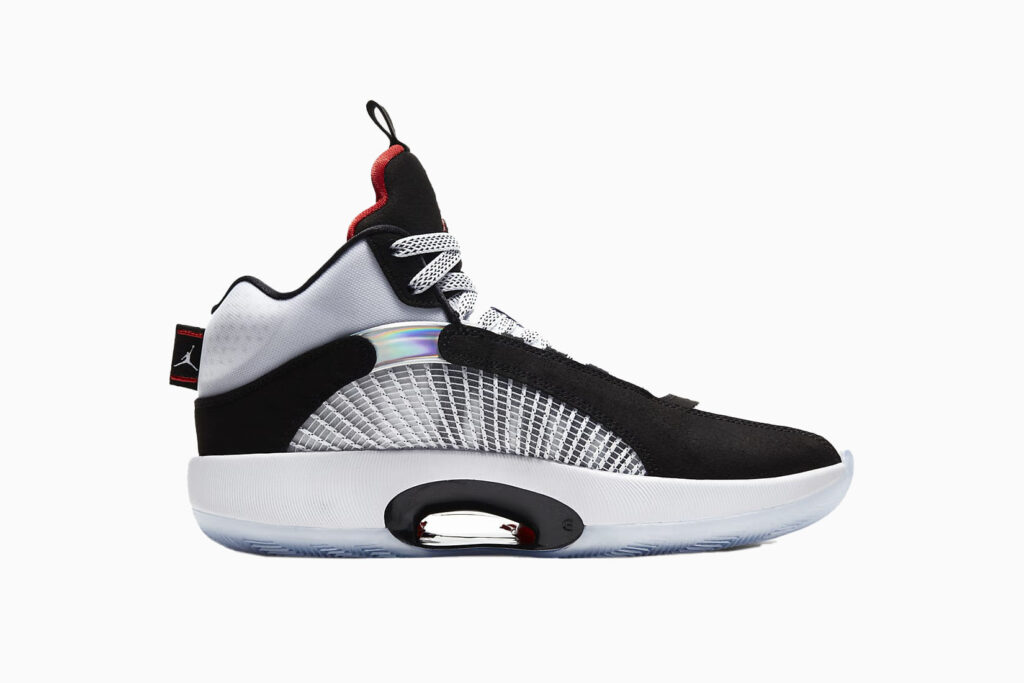 It was around this time that the Air Jordan style took a turn towards the kooky and quirky, drawing on all sorts of offbeat and bizarre references. We’re not complaining. We love the unique and high-impact aesthetics of the XV, which was inspired by NASA’s X-15 fighter jet while the high cushioned collar takes its lead from (rather surprisingly) moccasins.

The XV was the last sneaker to be designed by Tinker Hatfield and while MJ never actually wore it on the court, it remains a notable addition to the footwear line.

The AJ IX was released during a period when MJ was taking his first of three breaks from basketball, trying his hand at minor league baseball instead. As a result, this sneaker resembles a baseball cleat.

It also references MJ’s growing global influence, with different languages—including Japanese and Swahili—on the outsoles, and words such as dedicated, independence, freedom, and force—all part of the Michael Jordan ethos.

Created to mark the much-anticipated return of MJ to basketball for the 2001-2002 NBA season as part of the Washington Wizards, the AJ XVII initially made waves on the sneaker scene for its elevated price tag—the highest of all Jordans ever.

But the cost wasn’t the only noteworthy aspect of the sneaker. It was also inspired by jazz music, drawing parallels between the genre’s improvisational qualities and MJ’s own ability to ad-lib on the court, and originally came in a metal briefcase with a CD-ROM.

All Jordan shoes are known for pushing the boundaries of sneaker design with creative and innovative spins on what we all thought a basketball shoe should look like.

The XIX is a case in point, with its radically unusual silhouette. Apparently influenced by the black mamba snake, it’s definitely got one eye on the style horizon with its braided sleeve in place of laces. There’s also a carbon fibre support shank and full-length Zoom Airbag with a traditional Air unit in the heel, making these some of the most comfortable and best Jordan shoes around.

Released in celebration of a 10-year partnership between MJ and Nike, as well as commemorating MJ’s temporary retirement from basketball to join the MLB, the AJ X is notable for its lightweight and clean-lined design and combination of leather, nylon, and Zoom Air cushioning. 10 lateral stripes along the sole remind people of the sports star’s illustrious first 10 years breaking basketball records.

A newer but no less celebrated edition to the AJ line, the XX8 was endorsed by Russell Westbrook, the basketball superstar known for his flashy dunks and explosive style.

This is a show-stopping sneaker that takes no prisoners style or function-wise with its never-before-seen boot-high casing or ‘shroud’ (partly inspired by military combat boots) and responsive design with flexible yet supportive upper and solid traction.

Given that it was the same number he wore on the court, the 23rd model in Michael Jordan’s shoe line was always going to be extra special. And the XX3 truly is a masterpiece.

The ultimate sneaker for die-hard MJ fans, the stitching is meant to represent Michael Jordan’s DNA pattern and you’ll also find the player’s thumbprint embossed on the rear and his autograph on the toe.

As part of the trend for more eco-friendly sneakers (with Allbirds leading the way), the XX3 is also made using as little toxins, waste, and bi-products as possible.

Designed to commemorate the 20th anniversary of the Jordan Brand, the AJ XX represents nothing less than MJ’s life story in sneaker form. An ambitious goal and one that designers Tinker Hatfield and Mark Smith have pulled off with characteristic verve.

There are over 200 symbols etched by lazar into the upper, summing up the sportsman’s entire biography, including Michael sitting in the backseat of a 1976 Chevrolet Monte Carlo with his mum, Deloris. 69 dimples along the side spoke are references to his highest-scoring game.

The final sneakers on our list are also some of the wackiest, weirdest, and most memorable Michael Jordan shoes of all time, somehow evoking both the spirit of a fighter jet and 90s retro Jordans at the same time.

The XXXV DNA features the brand’s exposed Eclipse Plate 2.0, which extends up into the shoe’s upper, offering energy return, stability, and cushioning. A partially exposed Zoom Air bag in the heel helps with responsiveness while high-end materials like nubuck and suede mean this sneaker wouldn’t look at all out of place with a suit for a smart-casual look.

Buyers guide: how to choose a pair of Air Jordans

Before we explore the question of which Air Jordans are best for you, first a bit of background information on this oh-so-famous sneaker.

The first-ever pair of Air Jordans were released to the public on April 1st, 1985, following a partnership between Nike and now world-famous basketball icon Michael Jordan.

Despite the fact he was just a rookie at the time, Nike offered MJ an impressive 5-year deal. While at this point the brand was better known for making track footwear, they were also exploring new running shoe technology and the first pair of Jordans made their debut on the court in 1984, named the Air Jordan 1s, and were game-changers from the get-go.

The sneaker featured the classic Nike Swoosh logo alongside the Wings symbol. And, as the story goes, they were banned by the NBA for being red and black rather than mostly white as per regulations. Nike had to pay $5,000 per game for breaking the rules but the publicity was worth it, establishing the sneaker’s risk-taking and non-conformist reputation that endures to this day.

In 1986, the Air Jordan II was released, followed by the III in 1988, at which point the Nike Swoosh was replaced with the Jumpman logo—Michael Jordan, airborne.

Today, you can pick up a pair of Air Jordans for around $145 on average. But you could easily pay a lot more. MJ’s first-ever Air Jordans sold for $560,000 at auction in 2020, for example. The most expensive Jordans ever, however, are Drake’s custom OVO X Air Jordans, made of solid gold and worth $2 million.

What makes Air Jordans so unique? What specific details make all Jordans iconic and recognisable?

Some of the features that have contributed to making Air Jordans such a pivotal part of sneaker culture include the Jumpman logo, a silhouette of Michael Jordan leaping through the air. There’s also the clear rubber sole, as originally found on the Air Jordan V, and the loop at the back of the shoe that makes it easy to get on and off.

Patent leather is a common addition to many Jordans, a feature specifically requested by Michael Jordan himself. He wanted a shoe he could wear with a suit as well as on the court.

Nike’s Zoom Air technology is also found in most Jordans, boosting responsiveness, decreasing pronation, and offering that quick-off-the-ground feel that top basketball players depend on.

The plastic lace lock found on Jordans is another notable feature—designed to keep laces in place during jumps and dunks.

Other features you might find on Jordans include a removable shroud or gaiter—used to conceal the laces for a dressier vibe—and a carbon fibre shank plate for support and stability.

How to choose a pair of Jordans

With so many models on offer, it can be hard to choose the right pair of Air Jordans. There’s the question of aesthetics, of course, but also athletic performance.

How technically advanced do you want your Michael Jordan shoes to be? Or are you more interested in retro Jordans with a cool vintage flair?

If you want something you can wear to formal occasions, seek out collaborations between the Jordan brand and high-fashion houses, such as Off-White, LA men’s boutique Union, or fashion stylist and blogger, Aleali May.

If you want a pair of authentic and old-school Jordans, look for retro variations on the classics, such as the Air Jordan 1 Retro Chicago or 5 Fire Red Retro OG.

The most high-performing Air Jordan at the moment is the Jordan 35, featuring the latest sneaker technology, such as an eclipse plate for high energy return, as well as a Zoom Air sole.

Which Jordan shoe is the most popular?

The most popular Jordans are the Air Jordan 1s. The original sneakers in the line. They were the first to become a worldwide pop culture phenomenon. With their straightforward yet iconic styling and superlative functionality, they’re real winners.

What are the top-selling Jordans?

What are the best Jordans to buy right now?

The best Jordans to buy right now include the Air Jordan 35, introduced in 2020—a serious high-performing basketball sneaker. For street-style appeal, the best Jordans include fashion collaborations such as the Off-White x Air Jordan 4.

What is MJ’s favourite Jordan shoe?

MJ’s favourite Jordan shoe is the Air Jordan 11 Concord. The shoe is known for its innovative aesthetics, including patent leather that meant MJ could wear it for formal occasions. The sports star wore it for the entirety of the 1995-1996 season.

Which Jordan 1 has the best quality?

There are many different Jordan 1 colourways on the market now and all have the same high quality as the original Jordan 1s, made from full-grain calfskin with extra cushioning and support. One of the best colourways is the Air Jordan 1 Black Toe.