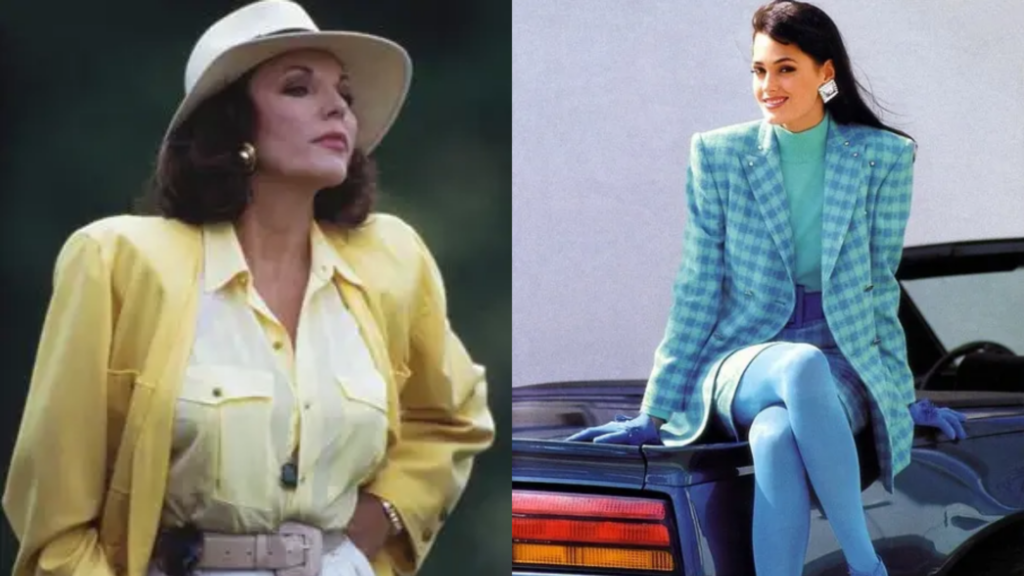 Loving the 80s and the Fashion Trends it Brought Us…

The 80s produced some interesting things. Fashion wasn’t its strongest point. As trends are recycled and decades revisited we can only hope that the 80s stays in the 80s, and spare ourselves from the embarrassment of oversized clothing and blinding colors. 80s fashion introduced hip hop culture, evolved punk fashion, and the yuppie movement. On this 80s fashion hub, you’ll see pictures and descriptions of 80s fashion and hairstyles. Many of the 80s fashion sprung from American & the UK subcultures that have had a great influence on the culture around the world.

The ’80s saw the rise of the Punk era. Multicolored Mohawks, bleached hair, short spiky hair, torn leather with chains, eyeliner, spike collars, and spike wrist bands. Punk is about rebelling against any and all social structures. Most of the extravagance of the era was with the aim to free the individual from the notion that everybody should look the same. Everyone was striving to free themselves from being sheep in the flock. This extreme counter culturism inspired shocking almost perverse 80s hairstyles and trends: close-pin piercings, shredded clothing, etc. 80s punk fashion is like nothing else.

The 80s were the golden age of Hip Hop. Adidas jumpsuits and shoes, multi-fingered rings, and thick gold chains. Hip Hop music, fashion, and culture were called a fad throughout the eighties and part of the nineties. In the 80s Hip Hop was the loudest expression of African American subculture and Black Nationalism became increasingly influential in rap. The “hip-pop” era also saw the split between male and female hip hop fashion, which had previously been more or less similar. Women in hip hop had emulated the male tough-guy fashions such as baggy pants and heavy work boots but added glamour with hoop earrings and lip gloss. In 1980, Nike had attained a 50% market share in the U.S, and in 1988 Nike’s famous slogan “Just Do It” became the pinnacle of the brands’ marketing efforts. Starter jackets, in addition, we’re also a popular trend in their own right during the late 1980s and early 1990s. A lot of 80s Hip Hop fashion became something of a status symbol, even today with famous rappers such as 50 Cent.

Huge hair, platinum blonde hair, glitter, lots of make-up, sexual ambiguity, tight jeans (bulging crotch). Male 80s “hair bands” were all very feminine looking and driven to do nothing but get wasted and have sex. Hairbands drew as many women fans as males despite their teased hair, lipstick, and womanizing. Back in the 80s, rock music was said to represent freedom of expression; the freedom to be yourself. These rock bands brought together all sorts of people, each one unique in their own little way, each one their own different personalities. During the 1980s, rock groups Poison, Motley Crue, and Guns N’ Roses all demonstrated their own style of fashion to the world of music. They were always seen wearing black, tight leather pants, leather jackets, and tall, spiked leather boots, not to mention accessorizing the leather with shiny silver belt buckles, chains, and rings. Some also wore dark eyeglasses and headbands, heavy makeup including dark eyeliner, mascara with big, long, frizzy hair with bangs, and tons of hairspray. Rock on!

The 80s material girl flaunted perms, bold colors, and heavy makeup literally to the max. The 1980s fashion had a heavy emphasis on expensive dressing and fashion accessories. In the 1970s, the silhouette of fashion tended to be characterized by close-fitting clothes on top with wider, looser clothes on the bottom. This trend completely reversed itself in the early 1980s as both men and women began to wear looser shirts and tight, close-fitting trousers. The main fashion trends were:

Shoulder-padded women were prolific, giving the illusion of having broader and less sloping shoulders. The appearance of big shoulders was very popular during the 80s. To get this appearance, women would wear shirts or dresses that had shoulder pads. Although many people would agree that the look was slightly manly, it was very popular during this time. The reason was that women felt that shoulder pads got rid of their shoulder imperfections. Today, most fashion styles do not include shoulder pads.

One of the most popular fashion trends of the 80s was business suits. This included skirt suits and pants suits. With both options, a lot of emphases was placed on the appearance of big shoulders. Business suits came in a wide variety of colors but it was generally more popular to wear dark colors, such as black or navy, or light colors, such as light green, blue or pink.

Shawls are another fashion trend that became very popular during the 80s. They were worn on various occasions and with many outfits. Women wore shawls with tank tops during the day and with evening gowns at night. Shawls were designed using a wide variety of colors, patterns, and materials. They were one of the most popular accessories of the decade.

Bags were very popular during the 80s. Throughout most of the decade, clutch bags were in demand. They offered so much appeal because they were so compact and were great for evening parties. Chanel handbags and Louis Vuitton luggage/briefcases were also very popular during this time, but due to the high cost, only the more elite were able to afford these designer bags. In the 80s, it was very common for women to match their handbags to their shoes.

There was a lot of emphases put on accessories during the 1980s, jewelry being one of the main fashion trends that were focused on. It was very common for women to wear pearls, gold, and hoop earrings. Charm bracelets, especially ones that held gold charms, were also very popular during this time. A lot of teenage girls took great pride in colorful plastic costume jewelry as well.

They might not have looked all that attractive, but I’ll be darned if leg warmers didn’t live up to their name! They were a massive trend in the 80s and were worn with heels or pumps, skirts, and leggings. Originally worn by dancers to keep their muscles from cramping after stretching, in the early 1980s leg warmers became a fad, and wearing them was fashionable among teenage girls. Leg warmers became particularly popular in the early ’80s when ‘let’s get physical’ came out, and the influence of the films Fame and Flashdance as well as the concurrent aerobics craze.

When leggings became popular around 1982, they did so unobtrusively with timid gray, white, and black leggings worn discreetly under skirts, dresses, and even voluminous thigh-length sweaters. Then someone cranked the heat up and we saw animal prints, paisley, lace, zebra, leopard, and snakeskin patterns. When the leggings party was in full swing, they stopped at nothing: liquid leggings that resemble molten metals; fluorescent, painted-on pants, and bodysuit leggings. Life was spandex and lycra, and life was good. Today they have evolved from being an exercise necessity to popular clubbing apparel.