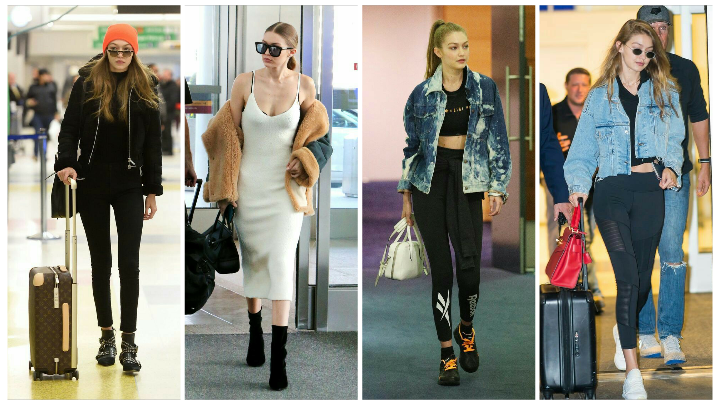 Gigi Hadid has rocked different styles to perfection at the airport. We have seen her wearing her chic black coat with an oversize gray scarf to look stylish in a black cropped jacket with black split pants while at the airport. Today, I am going to share with you her best airport moments in stunning outfits. Let’s have a look below and see how she stepped at the airport wearing….

She probably had the best fashion style moments at the airport, just wearing a gray two-piece hoodie and draw-string pants set with a black leather jacket. Gigi then paired them with black backless sneakers and accessorized the style with black sunglasses.

2. Gigi Hadid sizzles in a black leather jacket with an orange beanie

Gigi really knows how to keep the style looking cool while traveling. She styled a black leather jacket and matched it with high-waisted jeans. Pairing them with black beaded ankle boots with an orange beanie was a better option!

Not only can she take over on the runway by storm, but she can also do it better everywhere, like at the airport! She wore a blue cropped jeans jacket with black mesh leggings and paired them with white sneakers.

6. Dons two-piece pants and blouse set with a gray scarf

9. On a colorful display

10. Bella Hadid looks chic at the airport in black pants with a multicolored cropped leather jacket

12. Dazzling in a chic black coat with a gray oversize scarf

13.  Gigi Hadid is perfectly on trend in a neon green sweatshirt with black pants.

14. Nail’s chic style as she stepped out in a gray pinstripe oversize blazer with light blue distressed jeans.

Do you like traveling like Gigi Hadid? I know that you have liked one of her airport styles, which is it! Share with me your favorite style of hers in the comment box below!

Check the other posts below.

The 15 best Selena Gomez fall outfits of all time